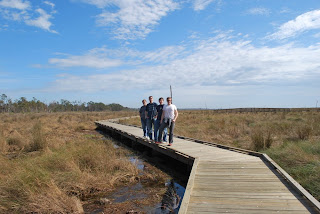 As I've indicated before, different people have different reactions when they hear about our trip. We just encountered someone at Fontainebleau State Park with a good reaction. After walking around the ruins of the former sugar plantation and a swamp boardwalk overlooking Lake Pontchartrain, we all headed for the restroom at the visitor's center. When we got there, though, we found the restroom locked and everything else shuttered. As some of us were about to explode, it was an unfortunate situation. All those acres of thick vegetation offered a tempting option, but we had just seen warning signs about cotton mouth snakes...stay on the path, they said. And while I don't know a lot about cotton mouth snakes, I know enough to know that's not something you want sneaking up on you while you answer the call. 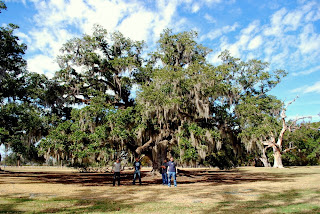 Frustrated, we were about to leave when we saw some motion inside the darkened visitor's center. We knocked, and out came a young park ranger. He graciously unlocked the bathroom for us, and while we went in one by one the others talked to him about our trip. He seemed truly fascinated, and in turn he told us to follow him into the

visitor's center. It turns out that it was a brand new building and they were just putting the finishing touches on the exhibits and store inside. Excitedly he showed us a 600 year old 18-foot long dugout canoe that somebody had just found. It was still in its packing box, and as the son of a museum curator (who has had a long professional interest in Native American art and archaeology), I was very impressed. Not just by the amazing quality of the artifact, but by the way the ranger opened up to us when he heard our story.
Posted by jordi at 4:14 PM

That's one cool find. I wonder how they found it. Was it submerged?

thats sick! why didn't you hop right in it for a great photo-op jord?