After months of planning, our trip is set to begin in a few short hours. Before I even wake up, Dave will be boarding a plane to Boston and the New Yorkers will be hitting up a bargain bus. Right now, however, I'm thinking about the many ways our big walk has changed over the past few days. Not in the practicalities or the details--they have been static for some time. The difference is that now we've got a whole new audience.

Throughout the planning stage of our trip, the only people who knew what we were contemplating were those closest to us--our girlfriends, families, etc. Things have turned up a notch this week as a result of our new-found goal of raising money for the Accelerated Cure Project. With the tireless help of my sister Maia we were able to secure a number of small-scale interviews in the media, mostly with small newspapers (and one huge radio station) from across the country. As these articles have started trickling into the public, and as we've ratcheted up our own campaign of alerting friends, more and more people have taken the time to write to me (or my sister) and lend their support to the big trip.

Among this flurry of communication I've noticed an interesting pattern: almost everybody talks about the state where they are from. Specifically, an amazing percentage want to know where we intend to walk in said state. Just in the last 24 hours I have been asked about Michigan, Kentucky, Delaware, North Carolina, California, Maryland, Florida, Texas. [FN 1] Often the person doesn't simply ask about a state by name, either. They use the nicknames. I had to laugh yesterday when, within two minutes, I got separate inquiries about our plans in the First State and the Bluegrass State.

I also noticed an unsurprising if related trend trend in the questions I've been asked by the various local newspapers. Sure, they all want to hear about our plans and my condition, but each has featured really targeted questions about what we are going to do in their state. Perhaps nothing exemplifies this more than the Nebraska interview which was conducted not with me but with cornhusker-for-life Philip. As I said, though, it is unsurprising that the newspapers would seek to push a local angle--heck, one of the papers' website is called "wickedlocal.com," after all. But combining this angle with the nearly universal state-specific requests by our acquaintences has really emphasized in me just how "local" this country is, and just how rewarding it will be to try to get a sense for it across 48 states. 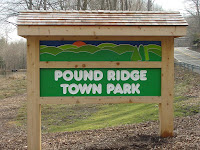 It is fortunate, then, that our plan involves few, if any, widely recognizeable landmarks or attractions. Honestly, the Herbert Hoover Memorial is probably the most well known, and that's saying quite a lot. Instead, our focus has been on local nature preserves, quiant city streets, and a significant number of town parks. I sought out town parks in particular because I wanted to go somewhere that is vitally important to the people who live in a town but completely ignored by everybody else. This week's experiences--specifically the local flavor of our interviews and e-mails from long-lost friends--have only made me more intrigued and excited to be a tourist who seeks out a truly "local" experience.
Anyway, it's late and I still have much to do in the morning before those wheels do in fact start rolling. The next time I write something, it will likely be from the back seat of a minivan. Until then.

[FN 1] If you're wondering (and who would blame you if you weren't), I've listed the state requests in order of how long I've known the person asking. In some cases that has been a very long time indeed. Twenty-six, twenty-seven years. Even somebody who was among my best friends in early elementary school but whom I haven't seen since. A testament to both the universal appeal of our trip and the power of modern social networks.
Posted by jordi at 4:51 AM

Hey Jordi!
Heard you on WCBS this morning -- wowser!!
This is my burning question: which mile will you be walking in the Land of Lincoln?
Cheers and good luck,
Gwen