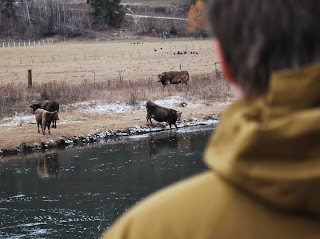 Imagine, if you will, the following scenario. For the last week you have been driving enormous distances, largely for the purpose of going on remarkably brisk walks that would seem to the outside observer only to punctuate the boring moments of driving. But you know that the walks are far more than half the battle (or, in the cases of Virginia and Tennessee, all of the battle). Although they average only a hair over half an hour, your walks have presented you with countless vistas, both of the beautiful and the bizarre. You have seen nature at its most pristine and civilization at its most basic levels. You have seen a cow drinking from an icy, white-watery river. You have been overwhelmed by the beauty of a sunrise over the gulf of Mexico and propositioned by a vagrant of questionable sobriety (and perhaps taste). You've been to the world's largest McDonalds and just another Taco John's. You have worried about the aligator warnings on the bayou just days before launching a ferocious bombardment of snowballs. You have attracted quite a lot of attention

from domesticated animals of all shapes and sizes and nearly killed a similar distribution of wildlife. You have been forced to reconsider your position on the unholy union of gas stations and slot machines. You have lost a hubcap and upon returning your rental car will probably blame Texarkana. You have publicly urinated in some of the most beautiful spots on God's green earth. And yet you were not prepared for this.

You are walking in a state park just north of Spokane Washington. The sun has probably set, but you can't see through the dusk-grey blanket of snowfall to know for sure. The park is surely closed, either on account of the snow or the dark, but you are too busy fiddling with your camera's manual settings to think about that, in search of a decent photograph in spite of the conditions. You set out to walk your mile on a slippery ridge looming high above the Spokane River. Having reached the half-mile point you and your cohorts turn around. There is a person walking on the ridge-road in the opposite direction. Through the contrast-less evening you percieve that the person might be holding a large cardboard sign. Another whacko. Just look to the ground, you think. Out of the very extreme of your peripheral vision you just barely make out the largest word on the poster. Kyoto? Obama? War? No...Uvada. 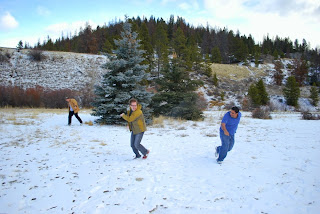 If you have ever seen the original Ghostbusters you know all about crossing the streams. And at this moment, the streams have been crossed. Let me recap this for you in simple terms. Snowstorm. Wilderness. Dusk. Rural Washington State. Uvada? Uvada is a town on the Utah/Nevada border, one of countless towns across the country that have adoped a similar method of nomenclature. At this point we are all aware of Texarkana, but there is also Florala, a Marydel and, if you squint hard enough, a Calexico. The thing is that Uvada is a ghost town, at least according to the internet. You won't know for sure until later today when you walk there. While your brain is churning all this information at punch-card speeds the person drops the sign. It's Brian. The guy who started the trip with you, the one you had to drop off in Atlanta so he could go back to work. There he went, and here he was, back with the pack in a snowy state park on the Spokane River. Now that's a surprise. 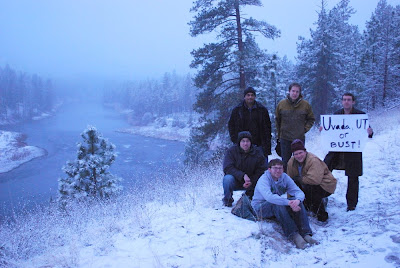 You'll have to ask him, but it seems that Brian decided shortly after he returned to New York that he was missing too great an opportunity to abandon the effort and sit by the sidelines. Money and effort be damned, he would have to rejoin us as soon as he could, even if that would only win him back a few days of the trip. Actions like this should make the four of us, Philip, Dave, Dan, and myself, who have been on this adventure for the duration sit up and appreciate just what we're doing and just what kind of opportunity we've been presented. The evidence is all around us. Nishant asked to join us at the last second, if just for a couple of days. His penance would be having to fly the red-eye to New York for an important family gathering from the bustling Spokane airport. [FN 1] My Dutch friend Walter, was bound to join us until it became clear that if he did he would lose his job. And still he espouses regrets about not making it to be with us nearly every day. According to his math, Walter is the fifth Beatle, and I guess I can't argue that point with him. The six people I've mentioned were the only people "invited" on this trip, but literally dozens of otherse have remarked how they wish they could have taken a trip like this. Often these people are older and far more successful than us, but despite their successes they would gladly trade their places with us for this one week. I knew all that. I had even spent a reasonable part of the Idaho panhandle thinking about how badly I wish Walter had been able to come along. Here we four are, unanimously jaw dropped by our surroundings...and yet we're American and are at least familiar with much of what we're seeing. It would have been absolutely staggering for a foreigner.

And yet it wasn't until Brian showed up in the woods, in the snow, in the dark that our good fortune really hit home. Not just our good fortune in having the opportunity to partake in this adventure, but in the opportunity to do so with these kinds of friends. When reflecting back on our 48 State journey a long, long time from now, it's fairly obvious which we will remember the most.

[FN 1] And I should take this opportunity to note the tremendous thanks that I and the others want to extend to Nishant for making three days of our trip that much better.
Posted by jordi at 11:44 AM