We Don't Make the States, We Just Walk in Them (and yes, they are different pictures) 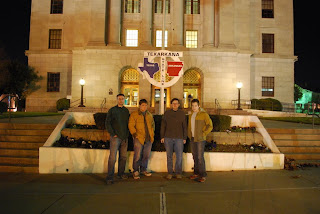 Well, it couldn't last forever. To this point all of our state walk experiences have been a net positive. True to their states' reputed spirit, last night's walks in Texas, Arkansas, and Oklahoma appear to have rebelled from this trend. Our excellent experience in Fonatinebleau State Park energized us enough to try to make Texarkana, our destination for both Texas and Arkansas, by sundown. Unfortunately Louisianna's motorists did not cooperate. In fact they seem to have planned a coordinated effort to block our path just enough to guide us into the city limits at dark.
When we got there it was immediately apparent that this would not be a friendly nighttime stroll through a quaint town, as had been our experience in the New England states. It would not even be a depressing stroll through a town far past its prime, as had been our experience in Martinsburg, WV. No, it was readily apparent that the primary emotion we would connect with this particular stroll would be fear. Perhaps there are better, shinier parts of town, but the area around Stateline Road and its famous dual-state post office was dull, decrepit, and just populated enough to make it thorougly dodgy, to borrow a term from our British friends. 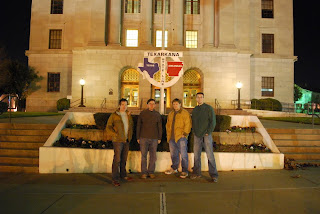 And dodge we did. After taking our two state pictures in record time ("switch!") at the bisected post office we decided to haul oursoulves AQAP--As Quickly As Possible. So we marched past one liquor store, two check cashing places (including a quaint abandonded drive-through called "Check Mate," complete with Knight logo), another three liquor stores, and then a few bombed out buildings for good measure. The street was far from abandoned--in fact it was well-seasoned with a cross-section of the dodgy demographic.[FN 1] We were approached a number of times, including a particularly memorable experience with a man making kissing sounds at Dan. To make matters worse, our extroardinarily brisk pace and its lengthened stride threw off our trusty but antiquated pedometers. It is also worth pointing out that the pace was brisk enough to cause my neurologically impaired left leg to seize up. I considered this a partial positive, because the exagerated limp probably made me look .0001 % more badass to the distant observer. 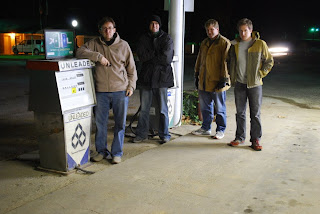 After Texarkana we drove as fast as possible to Oklahoma, where we had picked Tom, a tiny town at the extreme southeastern corner of the state for our walk. We had anticipated that this would be another questionable walk, but we didn't anticipate exactly why. Even when we reached Tom's single intersection--possibly the junction of the town's only two streets--and got out nothing seemed overly overwhelming. And then came the barking. First one dog, then another, then what seemed like dozens. The barks seemed to increase in violence with each passing moment. We decided to make this "a fast one" and picked the segment of the intersection's cross that had the most light. Not 100 yards in, however, we were faced with the blood-curdling snarls of a particularly ferocious canine. He seemed to enjoy playing a game where he would sprint, fangs barely gleaming in the nighttime light, directly at us, stopping at the extreme edge of his owner's property. He would then run back a few yards and repeat the process. What made this particularly intimidating is that given the darkness we could not really get a good look at the dog other than a sillouette that indicated he may have been a product of the Michael Vick puppy farm. We quickly turned around and chose instead to walk up the darkest segment of the cross, a completely uninhabited stretch with essentially no light of its own. This didn't really help, as we could still hear enraged dogs chargingat us through the surprisingly dense trees (who knew that Oklahoma has a national forest?). Just to make the experience perfect I twisted my ankle in a pothole filled with freezing cold water at the very apex of our distance from the minivan, aka the sanctuary from cerberus and his 18 closest allies. [FN 2]
Oh and then we had to drive six hours, well into the wee hours of the morning, to make Memphis. We were all a tad grumpy when we finally got in, perhaps in anticipation of our projected three hours of sleep. The beautiful beaches and bayous we had seen earlier that day seemed like a distant memory. But it is the quality of that memory that keeps us going. With an equally long day ahead of us today we will undoubtedly encounter something--anything--to renew our elation with the great 48-state adventure. As I said on our way out of Texarkana, "Hey, we don't make the states, we just walk in 'em." [FN 3]
[FN 1] It should be noted that we intentionally chose the street populated by a Whitman's Sampler of questionable characters--the side streets, while quieter, were even more sinister.
[FN 2] Although the twisted ankle had the interesting side effect of temporarily balancing out the exagerated limp I developed traipsing across Texarkana.
[FN 3] BTW this probably goes without saying but we don't hold our thrilling-for-the-wrong-reasons trips in TexArHoma against the states. We know it is largely a factor of our extremely tight schedule and demanding route. Still, little solace when faced with a hellhound or questionably-amorous drunk man.
Posted by jordi at 9:24 AM

That's two sets of nasty dog packs you have encountered so far. There must be some dog-repelling substance you could try. Tabasco? (Not sure that'd work with the amorous pursuer, 'though...it could inflame him further). Well, your tour should include the gritty with the pastoral, so you are hitting all the bases. It won't help you today, as the discomfrot is fresh, but as time passes the weirder episodes may linger longer on your memories than the positive experiences. Onwards, Argonauts! So far, you're proving yourselves worthy of the name.