Satiated and Conversated in the Tar Heel State

Among the mid-South states we hit up today, perhaps none was more gratifying than North Carolina. As a graduate of both Duke's undergrad and law programs, I've spent a lot of time in Carolina, and I've got
to admit I've missed the First In Flight license plates. Our time in the state was defined by two stops.The first was Cumberland Nob in the Blue Ridge Mountains. The park is technically closed for the season, but we went in anyway. The area closest to the road was largely "civilized," with numerous spots for campers to park and enjoy a good barbecue. Wandering around a bit we found a large field with an excellent view of the misty Blue Ridge. Perhaps inspired by the suddenly temperate weather, we decided to go back and grab Philip's football. For the next 20 minutes or so we put aside all thoughts of our stately marches and had a good, simple time in the sun. After all the stress of the first few days it was a welcome break. 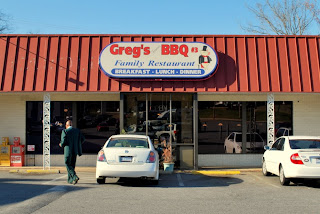 Inspired and hungry, we decided to look not to fast food restaurants for lunch but good old fashioned barbecue. For the uninitiated, I don't mean the burgers and hot dogs kind of barbecue. I mean pulled pork in a vinegar-based sauce, collard greens, hush puppies, sweet tea, the works. Figuring any good town in North Carolina would have its fair share of appropriate establishments, we stopped in the first town we crossed, Statesville. Ultimately we found a Greg's Famous Barbecue, which apparently is, well, famous. The food was ok, but the people were great. "You wanna watch the game?" the waitress asked, pointing to a tv. We politely declined. "I see," she said, "you guys are happy just conversatin'." Moments later she returned to demonstrate to our New Yorkers the greatest of southern institutions, free refills. For those of us with North Carolina roots this was all a great culinary trip down memory lane, and for those new to the world of pork butt...well, let's just say this was Dan's first hushpuppy and he liked it.

While not nearly as adventurous as some of our earlier or later state adventures, North Carolina deserves its own post for the way it relaxed us and helped us back on a straight path through the 48 lower states.
Posted by jordi at 7:41 PM

If you're ever looking for a good food establishment that has that local charm, may I recommend the website RoadFood.Com? I used the book by the same title - by Jane and Michael Stern - when I did my own x-country road trip about 5 years ago. Bon apetite!