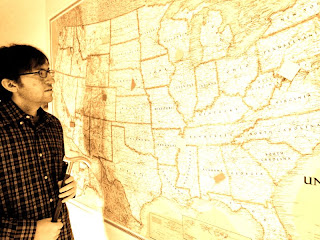 "See America First." It's a saying that's been in use for more than a century by the railroads, the National Parks Service, even Cole Porter. The traditional meaning is simple: before you go spending your time and money vacationing in Europe and other purportedly exotic locales, take a moment or a month to stop and consider the majesty and diversity of this land of ours. But "See America First" has a bit of a different ring to me. To me it means "See America Before It's Too Late, Before You Can't Walk, Before You Go Blind." It is a one-line muse, a stand-in title for the little adventure I plan to take over the next few weeks.

This past August was a rough month. Among other things, I was having a tough time walking and my eyesight appeared to be dwindling fast. As you may know, but as the record doesn't, I have MS. [FN 1] Not your run-of-the-mill Multiple Sclerosis, either, but some sort of weird Progressive-Relapsing hybrid that has seen me deteriorate at a much faster rate than is "normal" among MSers. So back to August. My legs were weakening, my eyes were blurring, and I was scared. What if a year from now I can't walk any more, can't enjoy a nice stroll in the country? What if I can't see the soaring birds and the blue sky and the post-industrial wastelands? What if I run out of sentimental questions to ask and just live in a world of static darkness? I couldn't control the answers to these questions, but I could try to preempt them by doing something I would remember forever, no matter what my condition. Light on funds but heavy on creativity, I decided a "possibly-final roadtrip" would be in order. Something truly extraordinary. Here's what I came up with:

I'm going to travel to every state in the continental United States in one shot. Nine days--the maximum I can go without taking more than a week off from work. And in that time I'll see Alabama and Vermont and Idaho and Iowa. It's a pretty tall task. Just think: if I spend one hour in each state, that's going to take up 48 of my 216 total possible hours for the nine-day span. Four and a half hours in each state would take up literally all of my time. So this thing is clearly going to be rushed. How, then, will I avoid a fate of whisping through Delaware on I-95, never really seeing anything other than the Wilmington skyline and a rest-stop zooming by? By demanding that I walk one mile in each state.

Given a brisk pace, even the cane-toting me can cover a mile in fifteen minutes. And I can hardly think of any way to better appreciate the qualities of a state in just fifteen minutes than by spending that entire time walking, looking, absorbing. Given the right routes, I think I can see an incredible amount of America in those mere 720 minutes.

It's certainly going to be a tough task, one I could never accomplish on my own. And so I was able to rope in four of my best friends to come along for all or part the ride. Given the unbelievable effort we're facing--think 18 hour days if we're lucky--this was a minor miracle and testiment to the quality of friends that I have. Here's a quick cast of characters in no particular order:
So that's the group. A good group, by any measure, but a great group by the exacting standard of this trip. I know it sounds crazy today, on day -9 or -8 or whatever day it is, but I think this trip is going to be the most memorable, interesting, and revealing thing any of us ever does. That may sound a bit bold to whoever is reading this, and I may be proven very wrong. It may, in fact, be just a lot of driving and running around. But as we have plotted the trip to ever-higher resolutions it has become more and more clear that we're going to see things in our country and in ourselves that we'd never imagined, or at least noticed, before. It's going to be a challenge--our brutal schedule and my equally brutal nervous system will guarantee that--but, as Philip has been pointing out with increasing frequency, it's also going to be an adventure. And that's something you don't come across every day any more.

[FN 1] Multiple Sclerosis--ahem--"is an autoimmune condition in which the immune system attacks the central nervous system" etc, blah blah. Basically my immune system, along with other possible mechanisms, is destroying my spinal cord, brain, and optic nerves. There is a broad spectrum of patient experiences with MS. Some people go their whole lives barely noticing it while others become paralyzed and die, often indirectly, as a result of their condition. I'm not that bad, but I'm definitely closer to the latter side than to the benign side of things. To keep my situation from deteriorating further, I undergo an aggressive regimine of chemotherapy--yup, the same stuff as for cancer, although dosed differently. I must admit that it's been a fairly horrible experience, but it has worked to some extent. More TK, I'm sure.
Posted by jordi at 2:48 AM

I was thinking "Jordi better have a good excuse not to come home this Thanksgiving!" Well, couldn't have a better one. I know you're in good hands. Good luck, you four!We'll be watching you from afar and wishing it were us. You're all nuts but, o, what a madness!Should we all be so blessed. Go, go, go, GO!