Retracing Confederate Steps, or "Why it Pays to Have a Bathroom at Your Gas Station." 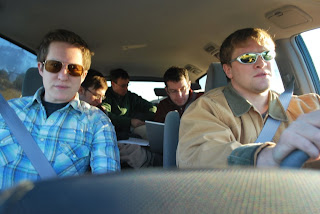 It is time to broach a very sensitive subject: my bladder. I'll wait for you to stop giggling. Done? Sure? Ok good. So here's the deal. One of the functions I've lost as a result of my MS is normal bladder control. Sometimes I can't go at all, sometimes I have to go immediately. And by "sometimes" I mean constantly. All day, every day. I have basically surrendered my ability to decide the wheres and whens of the world's most regular bodily function.

And so it was that I had to surrender this morning on our way to the New River [FN 1] in Virginia. I first gave a warning.

"Uh, guys, might have to stop to use the restroom soon."

"How soon," someone asked. 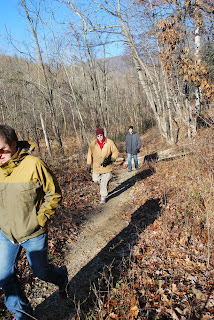 "Half an hour?" Not five minutes later I was hopping up and down on my seat. "Let's take the next exit...I could also use the urinal, I guess." Yes, I brought a urinal. A selection of them, in fact. The thing is, occasionally nature calls me EXTREMELY loudly and completely out of nowhere. Sort of like that alarm clock that completely obliterated my world yesterday. But anyway, in this instance I was not quite ready to cross that bridge...I just wanted to impart on my fellow travelers the urgency of the situation. Either that or I was gently threatening them with the prospect of hearing that plastic tinkle that few twenty-somethings have heard, though most recognize. Minutes later we pulled into a shiny new gas station in Hanging Rock, VA.

I jumped out of the still-moving minivan, ran inside, and asked for the restroom. The attendant, a fairly scrawny guy (pot, kettle) grumpily told me that it was out of order. That explains why the gas is 10 cents a gallon cheaper than the place across the street, I thought as I ran right back out the door at an even faster pace. I stopped Dave from getting gas and we darted across the street to a much older looking service station. The attendant there, a genial older fellow, told me with a strong southern accent where to go. And go I did. Relief was at hand.

Afterwards, I mulled around the store. I felt almost guilty--not because I used their bathroom and hadn't bought anything but because my first inclination had been to go to the shiny new gas station across the street and not what likely a venerable \refueling institution. The guy behind the counter was so nice that 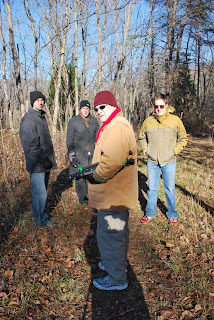 I found myself adopting the trace Southern diction that I picked up during my 7 years at Duke. I'm not ashamed to tell you that a "y'all" might have been dropped.

After picking up a few unnecessary items I went back outside, where I noticed what appeared to be...a trailhead. Yes, at the far corner of the parking lot was the trailhead for the Hanging Rock Battlefield Trail. Some quick cell phone research informed us that this trail and its environs were the site of a Confederate victory in the Civil War. We had to walk it, plans be damned. The trail itself was a very pleasant and roughly-hewn path along a ravine carved out by an icy stream. A number of us noted how much faster and easier the walk seemed than some of our earlier efforts, which often entailed dodging hurtling pickup trucks. It's a lesson to keep in mind when pursuing our future routes.

All in all, a very good experience. I guess I owe my bladder an apology.

[FN 1] An interesting name, given that it is reportedly the second oldest river in the world, behind only the Nile.
Posted by jordi at 11:10 AM

Just thought you guys should know that the History Channel is secretly following your adventure...they're currently airing a special called "The States," which describes a bit of the history of - you guessed it - each U.S. state! I just learned that Oklahoma was the last state to legalize tatooing...you guys might want to take that into consideration and plan a group tat session while you're there!

Great pics on these last couple of posts! You're definitely out of the city now.

(FYI, I am two of your "followers" now. I obviously don't know how to work this internet thing.)

You guys looked chilled to the core (and a tad sleepy) in this morning's pictures, but the football and the pulled pork must have taken care of both. I'm jealous as hell and crying (in longing) for the Carolinas. Enjoy! Can't wait to see what comes next.

Keep the photos coming! How about posting the music selections being played. Beyonce? Katy Perry? Pink?

Here something to keep you going...

A driver, obviously drunk, was heading the wrong way down
a one-way street when a policeman pulled him over. "Didn't
you see the arrow, buddy?" he asked. "An arrow?" the confused driver said. "I didn't even see the
Indians

A man was driving up a steep and narrow mountain road. A woman was driving down the same road.
As they passed each other, the woman leaned out the window and yelled, "Pig!"
The man immediately leaned out his window and replied, "Bitch!"
They continue on their way and as the man rounded the next corner, he crashes into a pig in the middle of the road.