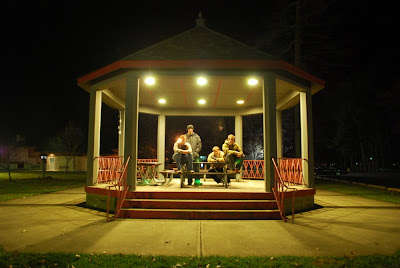 Expectations are a funny thing. Yesterday two of our stops far exceded anything we had hoped for. The remaining three stops were not quite a disaster but certainly not quite what we had in mind when sitting at home last month browsing through atlases and Google Earth. It was a day with such stark extremes that the morning seemed like some vacation taken in 8th grade by nightfall. And then there are days like today, when pretty much everything we did exactly met our expectations. Aside from a single GPS issue in Tennessee everything operated like clockwork. Deadlines were met, destinations were interesting and easy to access, and my pictures came out (for the most part). Even our one blip, where our GPS led us astray in search of a TN state park, was easily rectified when we stumbled onto a civil war battlefield on our way back to the highway. The trail at Mammoth Cave, while not totally earth-shattering, was peaceful and enjoyable. 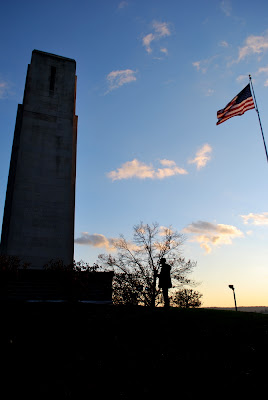 I found the William Henry Harrison Gravesite
particularly rewarding. The approach the site was exactly like it had been drawn up, to the point that I probably could have found the obelisk from the highway even without a map. We even got in just under the wire, beating the sunset by mere minutes. Once walking around the site we found not only an ornate grave to perhaps our most obscure president (he only served for a month before dying of pneumonia) but also a perfect vantage-point to take in the sunset over the Ohio River. Across the street, I was taken by the grave yard for a long forgotten city, the last remnant of a failed attempt to make "the capitol of the Great Northwest." Our trip is all about seeing America. Part of seeing America requires an appreciation of the starts and stops that were necessary to get us to where we are today. And I cannot think of a better way to appreciate them--the stops in particular--than by going to the beautiful tomb of a 30-day U.S. president and the graveyard for a city upon a hill that never quite took hold.
Next up was a town park in Batesville, IN. Again, it was nothing out of the ordinary (aside from a large above-ground resevoir), but it's hard to argue with the inherant Americana of a town park gazebo.
Our Niles, Michigan walk was similarly peaceful, as we walked along the shores of an icey river and again were greeted by near-perfect conditions for our standard walk-site's typical requirements for quick access, public parking, safety, and some level of memorability. 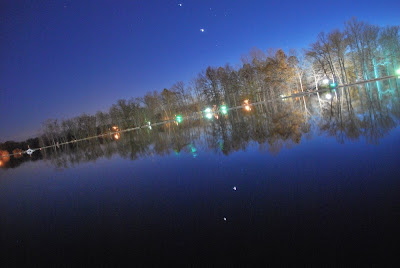 Finally, we were able to pick up Nishant, the newest member of our travelling band. After carefully coordinating a place and time to meet, we decided on a whim to walk around Chicago. It was again not anything out of the ordinary, but part of me felt like we needed to walk in at least ONE "big" city. That's America too, after all, and we were not going to lose a lot of variety in abandoning tomorrow's plans for South Beloit, IL. We will still be walking in Beloit, WI, after all. How different can they be? That's my expectation, anyway. Yesterday's experiences told me that perhaps my expectations are not the most accurate predictors of future endeavors. But today told me that on some days, some charmed days, they hit the nail on the head.
Posted by jordi at 1:37 AM

Jordi,
Am not surprised that you included a mile from the City of Broad Shoulders in your walk -- hope it was one of the best!
Happy Thanksgiving to you and the argonauts!
Gwen